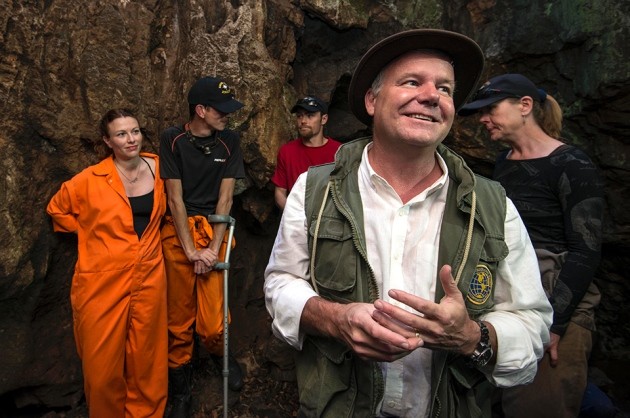 You’ve probably heard the news of our newest human ancestor, now named Homo naledi, discovered in a South African cave that appears to have been a mass grave of sorts. But have you heard the rest of the story?

It turns out that the lead researcher, Professor Lee Berger of Witwatersrand in Johannesburg, South Africa, actually crowdsourced his scientific excavation team. Not only that, but when once the fossilized Homo naledi bones had been extracted from the cave, he found out that the team he normally works with to examine early human remains was busy, so he turned to crowdsourcing again to be able to complete the task expeditiously.

“Dear colleagues — I need the help of the whole community,” palaeoanthropologist Lee Berger posted on social media on 6 October 2013.

Berger, based at the University of Witwatersrand in Johannesburg, South Africa, had just learned of a small underground chamber loaded with early human fossils. He was looking for experienced excavators to collect the delicate remains before they deteriorated further. “The catch is this,” Berger went on. “The person must be skinny and preferably small. They must not be claustrophobic, they must be fit, they should have some caving experience.”

Less than two years after he posted this missive, Berger and his team have pieced together more than 1,500 ancient human bones and teeth from the Rising Star cave system — the biggest cache of such material ever found in Africa. The remains belong to at least 15 individuals of a previously undescribed species that the team has dubbed Homo naledi, and they may mark the oldest known deliberate burial in human history, Berger and his colleagues report in eLife. For Berger, the research marks a milestone in a campaign to transform palaeoanthropology into an open and inclusive field, in which rare fossils are rapidly shared with the scientific world instead of being squirrelled away as an elite few scrutinize them for years.

The article continues, explaining why it was that Berber needed “skinny and preferably small” individuals to help with the fossil recovery, on the next page, we explore those details…